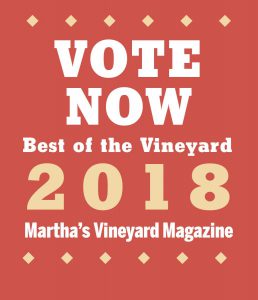 It’s that time of the year again!

Best of the Vineyard is hosted by Martha’s Vineyard Magazine and takes place annually.  Anyone can participate and vote in 7 Major categories featuring over a hundred consumer-related businesses on the island. The 7 major categories and examples of some of their subcategories are:

Voting is currently underway and ends April 7th at 11:59 PM.

Winners will be announced in June at a reveal party and results will be featured in the magazines July issue. If you would like to check out last year’s winner’s visit:

Martha’s Vineyard may be well known for its beautiful beaches and quaint island appeal. However, many movie producers also regard it as a premier location to capture the charm and sophistication that radiates from the island.

While it may come across as a quiet retreat, the iconic landscapes and landmarks of Martha’s Vineyard have played a key role in a number of films. Here is a look at 5 famous movies filmed on Martha’s Vineyard!

The most well-known movie filmed on Martha’s Vineyard is likely the 1974 classic, Jaws. The hugely successful Jaws helped coin the term “summer blockbuster” and launched the career of Steven Spielberg. It also helped put Martha’s Vineyard on the map as a premier tourist destination.

Spielberg cast many island natives in the movie. Martha’s Vineyard locals Christopher Rebello was selected to play Chief Brody’s oldest son, Michael Brody; Jay Mello was cast as the younger son, Sean Brody; and Lee Fierro was chosen to play Mrs. Kintner. Numerous other residents were cast as extras throughout the film.

Jaws II and Jaws: The Revenge

Scenes from the films Jaws II and Jaws: The Revenge were also filmed on Martha’s Vineyard. In Jaws II, Chief Brody must battle another mega shark that torments quiet Amity Island. In the third installment of this movie franchise, Chief Brody’s widow must overcome a shark she believes is targeting her family for revenge.

The 1995 remake of Sabrina starring Harrison Ford, Greg Kinnear and Julia Ormond featured iconic scenes on Martha’s Vineyard. As the characters Linus and Sabrina try to avoid the upcoming nuptials of Linus’ brother, David, they spend time enjoying the sights of the island.

The 2003 film Stuck on You is a tale of conjoined twins Bob and Walt Tenor played by Matt Damon and Craig Kinnear. The brothers’ wild adventures take them from their home on Oak Bluffs to Hollywood so Walt can pursue an acting career. Stuck on You was directed by Bobby and Peter Farrelly who have been known to frequent the island.

These 5 famous movies filmed on Martha’s Vineyard represent the mainstream cinema, however the island is also known for showcasing various independent films courtesy of the Martha’s Vineyard Film Festival. The organization was developed in 2001 by a group of friends looking for more thought provoking films.

This annual event will be held March 17-20, 2016. There is also a summer series at several local venues which features live music before the show.

These Hollywood blockbusters represent 5 famous movies filmed on Martha’s Vineyard. All these movies filmed over the years have led to Martha’s Vineyard being a great destination for celebrity sightings: Ted Dansen, Michael J Fox, and Tony Shalhoub of Monk fame are all frequently spotted on the island. Sandpiper Rentals even has the former home of Patricia Neal on offer as a vacation rental for your next visit!

While these films do a wonderful job of highlighting the many unique offerings of Martha’s Vineyard, they are no substitute for experiencing it yourself.

When you get the urge to enjoy the beauty and charm of this magnificent island, be sure to make your accommodations with Sandpiper Rentals. Whether you are looking for a relaxing getaway or a non-stop adventure, our unique homes offer something that will make your stay truly extraordinary. From cozy to colossal, in the mix or on the fly, Sandpiper will ensure your trip is unforgettable.

We’re introducing something new here at Sandpiper Realty… We’ve decided to team up with our sister company, Sandpiper Rentals, and offer what we call “Piper Picks.” Basically, we’re going to poll all the agents and staff from both companies to find out people’s island favorites – places to go, things to do, what to see – and then we’re going to share our top picks with you. And who knows? Maybe you’ll discover a great new spot to check out!

For our first installment, we decided to start with something easy:

“Where’s your favorite place to grab a cup of coffee in the off season?”

And the Piper Pick is….

Located in Post Office Square, Edgartown Meat & Fish Market is a family owned and operated business that’s been successfully serving the island community year-round since opening its doors in 2011. The café serves Starbucks Coffee and Espresso, and has a wide variety of delicious options for the avid coffee drinker. In addition to keeping you blissfully caffeinated, they also offer freshly baked bagels, baked goods and breakfast sandwiches.

If you haven’t already, we definitely recommend stopping here for your next coffee break!

Browse Our Selection Of Vacation Rentals