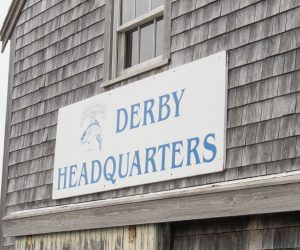 The derby has been an annual event for 73 years. It brings the community and lovers of fishing together in a multi-week fishing tournament. 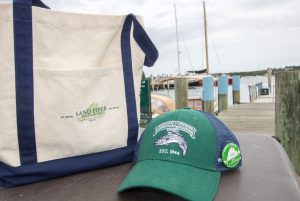 The derby was set up to help support the community, and focuses its overall goals on boating safety, conservation causes, and youth organizations. Every year money raised goes to The MV Rod and Gun Club, Red Stocking Fund, American Hero’s Saltwater Challenge, Sancy Pachio Memorial Youth Scholarship, and towards College Scholarships. Last year these contributions were around $43,250. 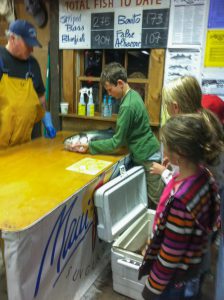 Weigh In times are 8am-10am and 8pm-10pm daily, at the Edgartown Junior Yacht Club throughout the length of the derby. Don’t have a fish to weigh in? That’s ok head on in anyway, it’s fun to check out what fish are being weighed in, and to see how big they are. During weigh ins you can also check the Board and see who is leading the catch. Gear is available to purchase at the Club House, another great way to support the event if you don’t fish. 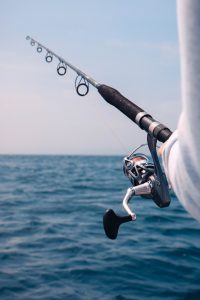 Did you catch a fish? There is always someone on the docks available to fillet your fish. That can be a bit of a messy sight, worth checking out if you haven’t before. Fishermen/women can get their fish filleted or can donate. Tons of fish from the Derby is donated for meals to local schools, the local jail, and to elderly services every year.

Daily, weekly, and grand prizes add to the fun for each fish you weigh in. Daily and weekly prizes range from gear to use or wear fishing to monetary winnings. The grand prizes; from shore a Cape Codder 19 Center Console Boat, from boat a 2018 Clay Subaru Car.

Get further information about the event at:
https://www.mvderby.com/

Want to participate? Here are the rules and regulations:
https://www.mvderby.com/pdf/2018rules.pdf

There are many great ways to relax while vacationing on Martha’s Vineyard.  Here are a few of our best ideas to get you excited about unwinding this summer!

A Day at The Spa 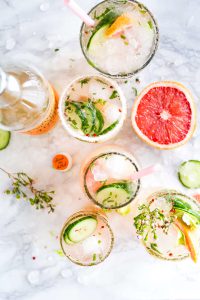 Treat yourself to a spa day. There are some wonderful locations throughout the island to lay back, relax, and be pampered. Spa days are not just a way to come out looking pretty on the outside from haircuts, nail treatments, or waxing. Enjoying what a spa offers can also make your insides pretty.

Many locations offer facials and body wraps that help rejuvenate and exfoliate, while also detoxifying and hydrating the body. Some examples of wraps include:

Mud Wraps; known for detoxing and revitalizing the body or even dissolving deep muscle tension.

Mermaid Wrap; A fruit scrub said to exfoliate, with coconut that fights aging.

Many spa locations also offer massage treatments. Massages are another great way to relax and relieve tension and help your body to relax while on vacation.  You might find out that a scalp massage is something for you! 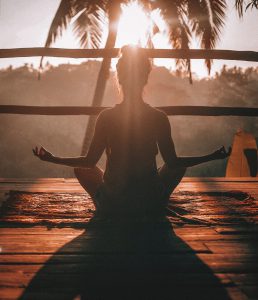 Meditation is a great way to relax while on vacation. It’s a great way to get some rest, relax your mind and ease your thoughts. Some like to meditate through words, in a journal or aloud. Whichever way you enjoy meditating, what better place is there then on an island, surrounded by the glorious sounds of the waves from the ocean, and the calm atmosphere away from the hustle and bustle of a city.

Yoga has been found to be a great way to relax and meditate. There are many forms of yoga, including regular, hot yoga, paddle board yoga, or even pre-natal. You don’t have to just be inside to stretch and pose, many offerings are outside in a field, yard, or on the beach. Yoga is focused around breathing, meditating, and the adoption of specific body postures. Yoga is overall great for health and relaxation.

We look forward to seeing you soon here on Martha’s Vineyard!

Originally built wooden in 1817, and rebuilt in 1838 of bricks. It is the only lighthouse on the island that does not offer access to the public. This lighthouse does host and houses some of the Coast Guard on the island. The area where the lighthouse sits used to be a sheep Pasture and is situated just minutes away from the downtown area of Vineyard Haven. Downtown Vineyard Haven was one of the major whaling ports on the island, is now where travelers and tourists near and far travel aboard the Steamship Authority to Martha’s Vineyard.

Originally built in 1828. This particular lighthouse used to receive signals from the island of Nantucket and transmit them to the rest of the island, and Cape coastal towns like Woods Hole. The Coast Guard took over the lighthouse in the Early 1930’s and the keeper’s house was removed in 1933 and never re-built. In the summer season, you will find many people and/or events take place near the lighthouse enjoying the sunset.

Originally built in 1828 it was a ¼ mile from shore, and the only way to reach the light was by boat. Over years the lighthouse has had some structural damage from storms and the current lighthouse (built in 1938) sits on mainland surrounded by a beautiful beach. This beach sees a lot of weddings year round, as well as family picnics. The lighthouse offers tours throughout the summer season. With a 360 degree view at the top glance Chappaquiddick, the harbor, and surrounding Captain’s houses on Water St.

Cape Pogue Lighthouse: Located on the island of Chappaquiddick (part of Edgartown)

The original structure was built in 1801, and this building has sure taken a beating over the years. Being situated on the cliffs close to the edge of the island, it has been destroyed and rebuilt at least 5 times. The current lighthouse was built in 1922 and has been moved more recently to avoid having to rebuild again. The lighthouse is part of the Cape Pogue Wildlife Refuge, run by the Trustees, and in season offers tours. It is a bit of a walk to get to, but a wonderful reward when you get there.

Originally built of wood in 1799, and had to be moved in 1844 from erosion of the cliffs. In 1856 the structure was rebuilt after a terrible storm and did so with bricks. Gay Head light is located on top of the clay cliffs, which over time and with major storms has taken a beating. This lighthouse has moved several more times since it’s rebuilding, most recently just a few years ago. In season they do offer tours of the lighthouse, and at the top, you really can’t beat the view. You can see along the coast to “up island” and take in the breathtaking view of the islands beauty. From below the area offers a viewing station to enjoy the view of the cliffs up close.

Visiting the Lighthouses of Martha’s Vineyard is a must for vacationers. We look forward to welcoming you this summer!

Browse Our Selection Of Vacation Rentals